A recent anonymous player survey that Sports Illustrated conducted of players on the PGA Tour found that Englishman Ian Poulter and American Rickie Fowler are considered the two most overrated players in the game. The belief, as a result, is they receive too much hype given their perceived level of talent.

When questioned, Tour pros gave both Poulter and Fowler 24 percent of the overall votes for most overrated.

Fowler is 26 and has only one win in the PGA Tour, a victory in a playoff over D.A. Points and the world’s No. 1 player Rory McIlroy (at the time, McIlroy was not No. 1), in the Wells Fargo Championship back in 2012. The field for the event is traditionally a stout one, on a great venue, but the fact that the win is so lonely which causes some concern.

If you’re looking for a great read on “why Rickie doesn’t win more,” head over to No Laying Up or click on the link here. It’s a bit eye opening and gives merit to Rickie’s world-class play. But still it wasn’t enough to convince Tour pros.

In 2014, Fowler did become the third player in golf history, along with Jack Nicklaus and Tigers Woods, to finish in the top-5 in each of the four majors during the same season. The caveat comes with the fact he also became the first player to accomplish that feat without winning any of the four majors.

Ian Poulter has not won since 2012 on the PGA Tour. In March, he seemed to be in control at the Honda Classic, only to play poorly on the rain-delayed back nine to open the door for Padraig Harrington and Daniel Berger to steal the show, Harrington eventually to take the title. Poulter has finished eight times in the top-10 at majors, but never won.

The most notable major championship performance from Poulter was in 2008 in The Open Championship where he finished 2nd. His late inspired play made a touch of a run, but his efforts still fell 4 shy. Guess who again– that’s right, Padraig Harrington.

Does Harrington have it out for Poulter?

Nevertheless, the 39-year-old has won 12 times on the European Tour and is considered one of the most feared players on the European Ryder Cup team. He’s a cut-throat in match play, a tenacity which hasn’t seemed to translate into typical Tour events.

Poulter began playing regularly in 2005 on the PGA Tour. He has won only the 2010 Match Play Championship and the HSBC Champions in 2012. Both of those tournaments are World Golf Championship tournaments with a limited, but strong, field.

After reading the resumes of both golfers and looking a little deeper into the situation, I found myself asking “why.” Why are these players considered so overrated by their peers? Overrated is challenging of a perception. I have a theory.

I think both players (along with a few to be mentioned) have built this perception through their social media campaigns. Boasting close to 3 million followers between the two of them (Poulter holding the majority), they have powerful influences in social media circles.

Their candidness to their accounts have further endeared them to fans. This has built a perception that popularity equates to Tour status. Both Poulter and Fowler are known as much off the golf course with endorsements etc. as they are for their play. All of it culminates into an “overrated” perception.

In Rickie’s case, his fashion influence with the youth movement plays a major role in the perception. Overrated should never be considered a compliment, but in Rickie’s case it almost could be. Players are essentially saying, “you’ve really got some pull with both the fans and the media, now win more.”

It’s as much of a compliment as “overrated” could be.

Poulter has influence in the fashion world, as well.

Bubba Watson, the two-time winner of the Masters, was third in voting at 12%. Fellow American Hunter Mahan was fourth receiving 8% of the votes by his peers. Both are loyal to Twitter.

In these players’ defense, they had to pick someone. When the question is posed for the player survey, they’re going to have to give an answer and every, single, player on the PGA Tour is out there for a reason. They are supremely talented and none of it is by accident.

Think twice before tweeting or making strides with fashion? 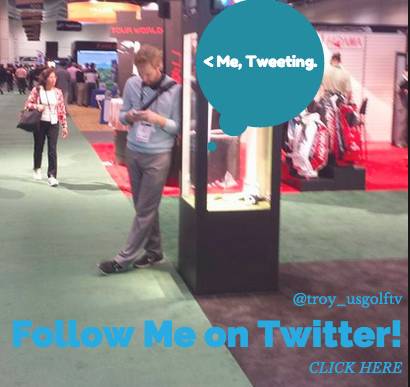