Brief Summary: The Bombtech Grenade 2 numbers were very comparable, aside from inflated spin, to the current numbers in my driver now. Shaft felt a bit soft, numbers verified the feel. Overall, a good driver at the price point.

It’s hard to find a golfer, not in pursuit of more distance off the tee. This desire typically leads them on a constant expedition for a new “big dog.”

Marketing campaigns throughout the golf industry portray a technologically advanced driver as the key to those high, soaring tee shots that travel the distance of three football fields. All of the top professionals then sport the new equipment.

Innovations are on display. New equipment is hyped. And consumers routinely pay $400, $500, and $600 for a new driver. All in an effort to gain a few yards and hit a few more fairways.

What the team over at Bombtech Golf developed is a product that stands in the face of the current model for golf clubs. They also take their technology straight to the consumer, creating a cheaper final product as distribution funnels are eliminated. After all, type in Bombtech Golf to Google and you’ll see the headline:

They also take their technology straight to the consumer, creating a cheaper final product as distribution funnels are eliminated. After all, type in Bombtech Golf to Google and you’ll see the headline: Bombtech Golf: Direct to consumers golf clubs.

In 2014, we were able to work with the original Grenade driver. They had teamed with the University of Vermont to build a minimalistic driver that performs on par or better, than the other leading drivers in the industry. Bombtech didn’t get fancy with physics and marketing jargon. They took the basic laws and applied them to their technology. From it, came the Bombtech driver line.

It’s 2017 now and they’re back with the second installment in the Bombtech driver line—the Grenade 2.

If you’re a golfer on Facebook, you’ve seen the ads. But does the club live up to the hype?

What’s New with the Bombtech Grenade 2?

But they took “4 years of feedback from our original Grenade driver” and worked to enhance the new driver. Studies by the University of Vermont found that they increased aerodynamics by 50% over the original version with the Grenade 2.

They’ve also moved the CG lower in the clubface to give golfers a higher, more vertical hitting area to hit long, high drives.

Reviews on the Bombtech Grenade 2 Driver.

“Although it does not fix a bad swing…..if you meet it half way it will not disappoint you! I was hitting up to 300 yds for the first time ever! Looking forward to playing with this club this summer!”

“Straight and long as an arrow, only played it for one round so far, but looking forward to dominating my buddies for the rest of the year. The pin has been pulled.”

The Look and Technology

Now the coloration is different, Grenade vs. Grenade 2. The technology, however, is the same. The dual cavity design remains, a design philosophy in place to reduce drag and increase clubhead speed (P.S. that means more distance). The club is built

The look is still maintains the matte black cover and the white alignment aid. The hyper-green, brazen shaft remains the same, as well. 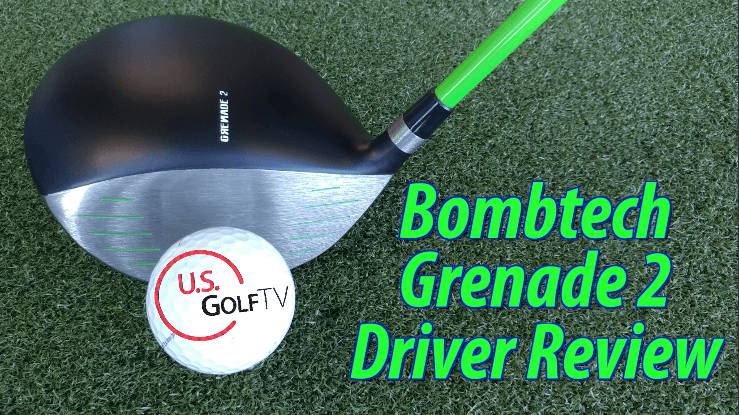 This is the part of the review where people’s interest peak. So let’s dive into the numbers.

When conducting this review, I looked at three key areas:

It’s important to note, the Bombtech Grenade 2 I used was 10.5 degrees. My current driver is 9.5 degrees. Launch angle will play a factor in some of the numbers seen in the review.

When I tested, I hit close to 10 shots with each driver, alternating between them. I then took the 5 best shots with each club, so that I knew I was comparing fairly. All of the mishits, poor shots, and misreads were eliminated. This gives us a set of pure data.

My current shaft is built to be a bit stiffer than normal, and I believe that Bombtech’s shaft, plus innovative design played into this increase in clubhead speed.

This bodes well for the Bombtech Grenade 2. It’s a fast design.

This is the number most people care about. HOW FAR DID IT GO?

I carried my current driver 3 yards further than the Bombtech Grenade 2 during our testing. I’ve said this before, but the softer shaft in the Bombtech is going to increase the spin, increase the launch (which it did) and in turn, reduce somewhat the distance.

The 10.5 degrees of loft wasn’t best suited for me either. I believe a 9.5 would see a yard or two increased distance.

This was an area where I noticed a peak. The difference in spin was stark.

The Bombtech Grenade 2 driver was spinning an additional 600+ RPMs, close to 3400 RPMs. My current driver is consistently 2500-2800 and averaged 2684 RPMs during this day’s testing. This disparity in spin is going to affect the distance the ball travels.

This is something I will chalk up to a combination of the extra degree of loft (10.5 degrees Bombtech vs. 9.5 degrees) and the softer feeling shaft. A softer shaft is going to flex more during the swing and as it delivers the head into impact, it will impart more spin on the golf ball.

The Feel and Aesthetics

Similar to the previous model, the feel with the Bombtech was solid. Still loud, with a violent sound at impact. For those that want the #PullThePin explosion at impact, the Bombtech delivers.

It’s a firmer feel at impact, especially since I’ve played only Ping and Titleist drivers my entire life. The sharper feel/sound was definitely something I noticed.

The shape looked appealing at address and it was a shape I like.

I’ve read elsewhere (like in Matt Saternus’ review on PluggedIn golf) that the shaft was on the soft end. I think the softer, lighter shaft played into the increase in spin.

Now my driver is a few years old, but the technology is still very good in the driver I currently have. The Bombtech stuck with it, pound for pound.

Price point may tell you this club is faulty and does not stack up with the best in the industry. It’s too cheap, right? But my day of testing told me the exact opposite. The Bombtech Grenade 2 stacks up with some of the top manufacturers in the industry.

With the right shaft and proper loft for your golf swing, you’ll be hitting bombs with the Bombtech Grenade 2 driver.