When it comes to proper setup, golf instructors look for three key components in their students.

The setup is the most important element of the swing, and all too often amateurs and even professionals struggle because of poor address positions. If you set up correctly, there’s a much better chance of you hitting a decent shot. In this short video, PGA professional golfer Todd Kolb explains the elements of the correct golf setup.

In the video, he starts by taking the normal driver stance, with his weight equally distributed on both feet. He then moves his left hip so that it’s directly over his left ankle, as shown in the screenshot above. The pressure now falls mostly on his left or lead leg. Many of the world’s best players use this or a similar stance for setting up a key to creating a repeatable golf swing.

Head Behind the Golf Ball

When Todd is set up, his head is positioned behind the golf ball: 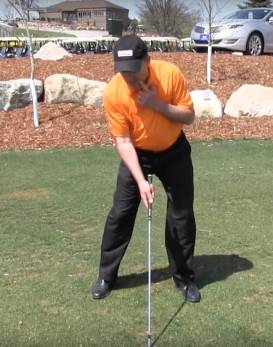 It stays behind the ball through the entire swing and especially at impact. 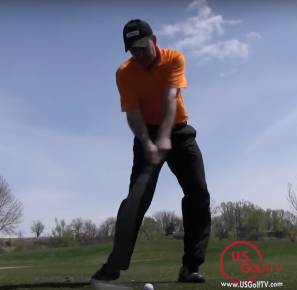 Many times, amateurs fail to get behind the ball, and as they execute the downswing, their heads move even further forward as the pressure is shifted to the left side. This movement causes the golfer to release the club earlier than desired in order to make contact.

Notice how Todd’s spine is tilted to the right as he swings. He maintains that spine tilt throughout the swing in order to keep his head behind the ball. For amateurs having trouble with this concept, it may help to touch the right hand to the right knee before gripping the club. This helps establish the correct angle for the spine tilt.

The final piece of advice from Todd is to position the left arm higher than the right arm at address.

This position helps him to shape the ball flight into a nice high draw. Why? Because at this position he swings the club up and to the right, and this in turn makes the ball turn over and draw. With practice it becomes easier, and it feels more natural.

When setting up for a golf swing, the left hip should always be directly over the left ankle to enable the body to rotate for a proper swing. The head should be behind the ball, and the left arm should be higher than the right arm to better control the shot. Follow these simple tips when setting up, and you will deliver better shots consistently.