The Ultimate Guide to Ball Position at Address | USGolfTV

The Ultimate Guide to Ball Position at Address

The Ultimate Guide to Ball Position

You hear the words “position” or “positioning” in sports a lot—and with good reason.

Football coaches talk about the importance of field position and positional matchups in regards to players. Basketball coaches stress being in the right position on defense or to grab a rebound. Auto racers are obsessed with pole position and getting position on the track so they can make a move towards Victory Lane. Boxing, tennis, soccer, it doesn’t really matter what sport you choose, your position is key.

Golf is certainly no different. And today, we’re going to talk ball position at address—with all clubs.

(Watch the video below to work through the different clubs in your bag, and learn a handy trick to get you the proper distance from the ball too!)

It all goes back to the basic fundamentals you learned during your very first junior lesson. Grip the club with your hands in the right position, stand with your feet, and the proper ball position at address. Without these basic fundamentals, you simply can’t play good golf.

Now you might think, “I learned about those things as a kid and it doesn’t apply now.” Not true. We could all use a refresher course from time-to-time. There could be several reasons why you played poorly during your last round. You might have doomed your round before you swung the club, all because you weren’t lined up properly.

Knowing the proper positioning during setup is the key to scoring, and in this article I’m going to walk you through your bag and show you how having the proper set up will help you play better and score better.

Ball Position with the Driver 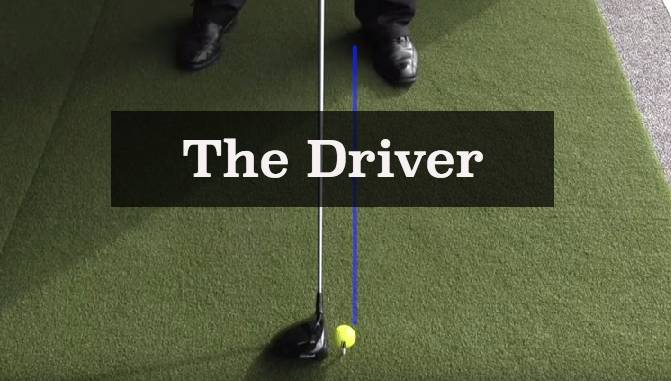 Let’s start with the driver since it’s the first club you’re going to grab and a good drive puts you in a position (there’s that word again!) to make par or better.

To hit a good drive with maximum distance you need two things: a high launch angle and low spin on the ball.  Getting the ball in the proper position in your stance is the key to making it happen. (P.S. We measure all of these numbers with our Flightscope)

The ideal position for the ball is off your left heel (if you’re right-handed).  This allows you to make a nice swing and create a positive angle of attack for your drive.  By that, I mean you’ll be hitting slightly up on the ball and produce the optimal combination of a high launch angle and low spin.

The tendency with most amateurs is to have the ball more in the middle of their stance.  This means you’ll be hitting down on the ball and imparting a lot of spin and a lower launch angle.  This will rob you of distance and accuracy every single time guaranteed.  A simple aid you can use is to put two golf balls at the tips of your shoes.

Now step back and look at the three balls.  If it looks like a perfect triangle, you have the ball too far back in your stance.  It should look almost like an “L” and be close to a right angle.

Do that and you’ve got the proper setup up to grip it and rip it.

When thinking irons, you need to change your thoughts from the driver. Instead of positive angle of attack, we need to apply a negative one. This means hitting down on the ball.

Ideally, you will hit the ball first and the turf second. If you find yourself hitting the ball too fat or too thin at times, you need to check the position of the ball in your stance. You want to be hitting down on the ball and trapping it between your club face and the turf.

This is a negative angle of attack. Take the balls from the previous tip with your driver and do the same thing—put them at the tips of your shoes. This time, the balls should form a symmetrical triangle with the ball located in the middle of your stance. If you have the ball off your left heel like you do for the driver, you’re going to be hitting up on the ball and topping it. It doesn’t matter what number iron you’re hitting. 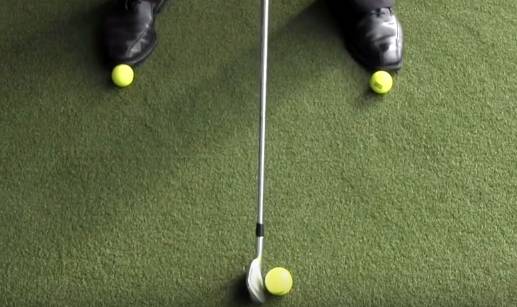 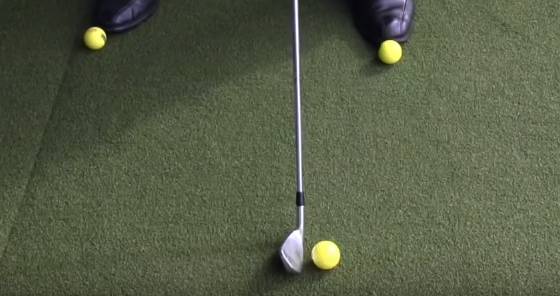 There’s a misconception if you’re hitting a 2 or 3-iron you need the ball up in your stance a little more than a 6 or 7-iron. Keep the ball in the middle of the stance to hit down on the ball and make clean contact with all your irons.

Clean contact all starts with your ball position with your irons. A ball hit crisply will have a better trajectory and will typically fly much further. Any golfer should be able to feel this difference—it’s amazing!

Again, Todd Kolb to save the day! A video about proper ball position with the irons:

If U can not define why you R having success it will be short lived. Know what allows you to be successful and the success will continue. 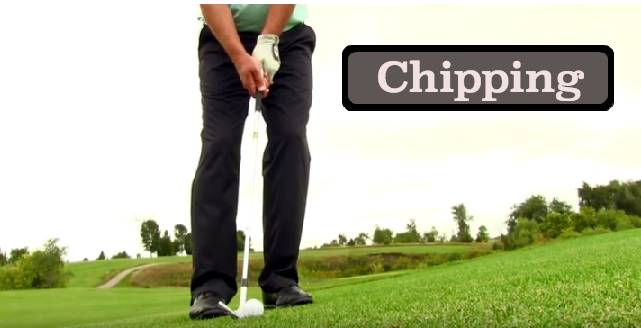 Around the greens, ball position is equally important so you can chip it close and save par.

Let’s assume you’ve got a pretty standard lie, maybe in the fairway just short of the green or just off the fringe. Move the ball a little back into your stance and keep your stance narrow. This isn’t the same stance you would have for a driver or iron shot. Keep the feet pretty close together. Then play the ball off of center and closer to your back foot.

A second component to effectively hit this shot is to open your stance a little bit and move your hands just over the ball slightly. The tendency may be to press your hands forward more, but resist this feeling. This will deloft the club and make your chip much harder than it needs to be. We want the club to be our friend. Digging the leading edge won’t do us any favors.

Finally, lean forward so more of your weight is on your left foot. Ideally about a 70-30 weight ratio for your left foot compared with your right. Just like this: 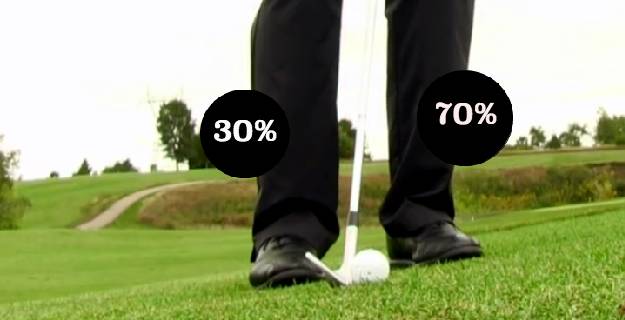 Doing this will give your swing stability and ensure you’re hitting down on the ball and letting the loft of the club do the work.

There is no need to help the ball into the air. That’s what your wedge is designing to do. Now simply make your normal swing and watch your ball cozy up to the flag. The number of strokes you will save with this simple tip will add up quickly during the course of your round.

Todd Kolb has a video explaining this in-depth:

Ball Position for Chipping from Rough 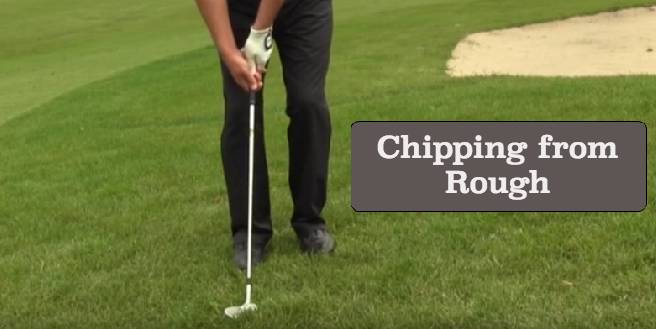 Now, suppose you’ve missed the green a little by a little bit more than a yard or two. Suppose you’re in some pretty nasty rough, too. Not to worry.

First thing first, let’s address that ball position. Move the ball back farther in your stance than previously talked about with chip shots. Your right toe should be pointing at the ball (see above photo).

The reason is because you need more loft in thicker grass. More loft gets the ball up higher and lets you swing quicker. Now make the same swing as you would from a better lie and finish the swing! Don’t stab at the ball and slam the clubface shut at impact. Be aggressive and confident with your swing. You’ll be pleased with the result.

Ball Position for the High Shot

Suppose also you left yourself with a nasty chip shot and need to hit the ball high and have it land soft. Phil Mickelson is a master at hitting perfect flop shots under the most pressure-packed situations. You can be too.

Remember your ball position and take the fear out of the flop shot. You need to deliver more loft to the shot so move the ball towards the middle of your stance. 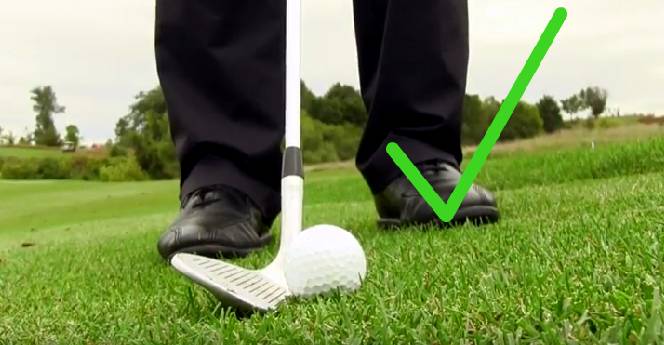 Keep your normal, narrow stance like you would for a regular chip shot but don’t lean your hands too far ahead.

Remember, we need loft to execute this shot. Keep your shaft angle neutral and make your normal swing. That’s it. There is no need to be afraid of the flop shot. Ball in the middle of your stance, keep your hands a little back and finish the swing. The ball will pop up high and land soft with minimal roll.

Todd Kolb with the complete explanation in this video:

Ball Position for Playing the Wind 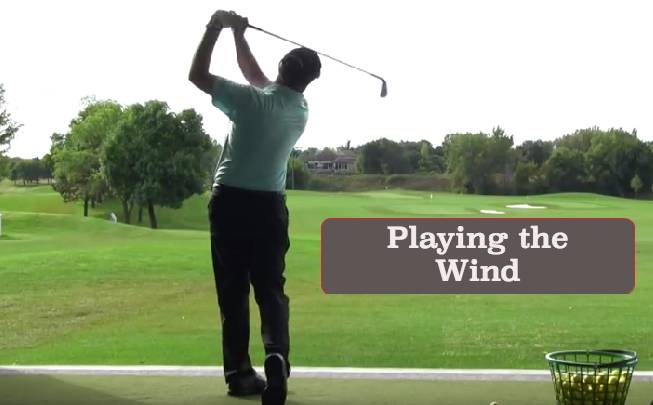 Finally, let’s talk about hitting the ball in the wind.

The Scots have a saying “Nae wind, nae golf.” It doesn’t matter if you’re teeing it up at St. Andrews, Florida or Nebraska, you’ve dealt with some windy conditions from time-to-time. Obviously, a high ball flight is going to be problematic on a windy day. So you need to keep the ball low.

Next, push your hands slightly forward. Remember doing this helps to deloft the club even more and will cause you to hit down on the ball more.

In this case, that’s a good thing because it will keep your ball flight down. Ideally you want the shaft and clubhead to be working at the same rate, and your finish will be a little shorter with your arms more extended than normal. Your ball flight will be lower and you’ll have more roll on your shots as well.

Todd Kolb explains this concept in the video below:

Take some time at the range and practice these shots and make sure you’re in the right position to play the shot in front of you. Each of these concepts will require some time to understand and execute properly, but when done so, you’ll see the improvement.

If you want to ask more questions, reach out to our team on Twitter: @usgolftv or @ToddKolbGolf.

Pop-up drives, fat irons and chunked or bladed chip shots will be a thing of the past once you make sure your feet and hands are where they need to be.

And speaking of position, with these tips you’ll be in a winning position on the golf course.